Seviper was introduced during Gen III, which was when I fell out of Pokemon.  I remember when I first saw it in the anime with Team Rocket, all I could think was "WHO THE HECK IS THIS SNAKE AND WHERE THE HECK DID ARBOK GO?!" The idea of Seviper replacing Arbok in the anime enriched my dislike of Gen III. However, when I started to get back into Pokemon and the anime when Gen IV came out, I couldn't ignore how cool Seviper looked. Of course, I also couldn't ignore the fact that it was a snake. Eventually he grew on me, and now I adore him just as much as the other snakes. 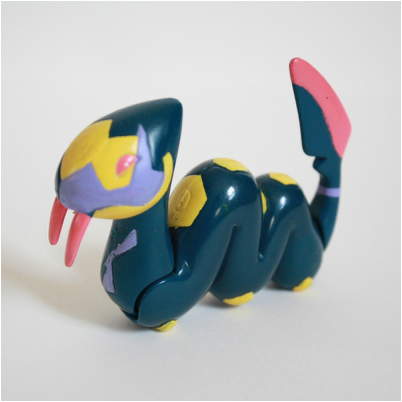 This snakey figure is cute and bendy!  He's one of the most common Seviper figures you can find.  You can't see it here, but on the other side of this figure, you can see a screw on his head and tail, which makes him bend!   It's one of the largest Sevipers figure I own. The way his eyes are shaped makes me think that he's super happy! 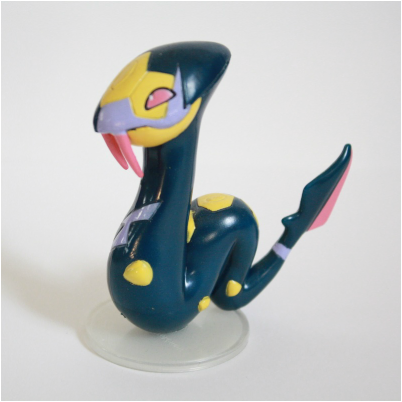 Another large, and super happy Seviper figure!!!  This particular figure is the Data Carrier figure, and is also one of the largest Seviper figures out there!  I believe it was made by Tomy in Japan.

This figure makes me super happy.  His pose, his face, the rarity of this figure....everything!!!  He took me a long time to track down because I wasn't sure what exactly he was called. Other collectors informed me that it was the Data Carrier figure, but I wasn't sure who made it or how to search for one.

I was finally able to get my hands on one after a seasoned PKMNcollectors member decided to sell off most of her collection in 2013.  I'm still forever thankful she allowed me to purchase this Seviper, and he is in the most loving snake home ever! 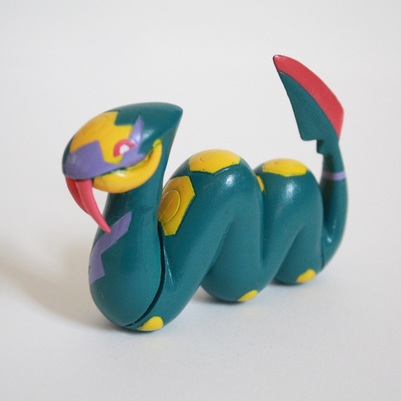 This guy is so elusive and mysterious!  I found him on eBay with a bunch of other figures, MIP.  I think they came from a vending machine of some sort?  Either way, this set of figures featured gen 3 Pokemon, and they all were essentially build able figures.

The figure itself is very heavy, and comes apart in 3 pieces!  His head, body and tail are separate, but are very easy to put together.  The color of the figure is more green than black, which is kind of silly...but hey!   We all love unique merchandise! 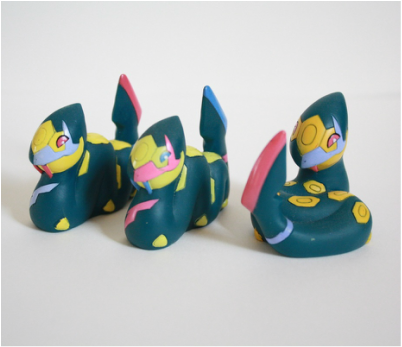 It's basically mandatory of me to own a Kid in each of my collections.  Seviper has been graced with a whole bunch of different Kids!!!  The one of the far left is the normal Kid, the one in the middle is the shiny Kid, and the one of the right is the attack Kid, and he is doing the move Poison Tail!

I'm actually super pleased that Seviper ended up with legitimate shiny merchandise.  There were only a handful of Kids that received a shiny version, so it's an awesome time for snake collectors everywhere, knowing that Seviper has a shiny Kid!  His yellow parts on his body should be more green instead of yellow, according to his shiny game sprites....but I really do love the pink and blue parts on him!  Such a vibrant little snakey. 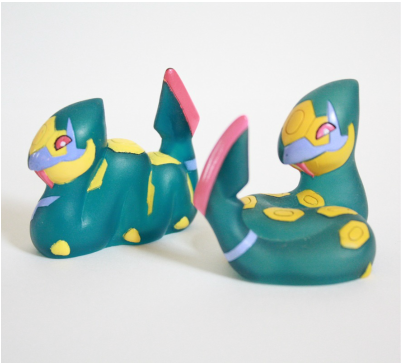 Deliciously clear, super stunning clear Seviper Kids!!! The regular clear Kid is on the left, and the attack Kid is on the right. 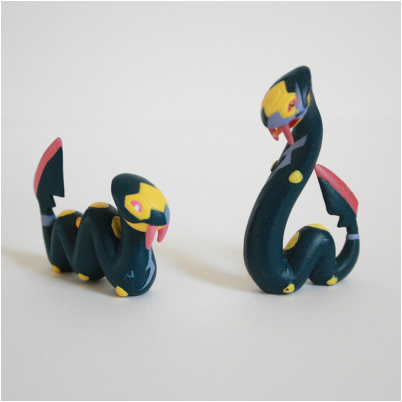 Here are my two baseless Seviper Zukan figures! The one on the left comes paired with a Zangoose, and the on the right is paired with Wobbuffet and Meowth.  However! I wasn't really too concerned about the additional Zukan figures and having the complete Zukans with their base. I mainly just wanted the Sevipers, since I think they look beautiful on their own! 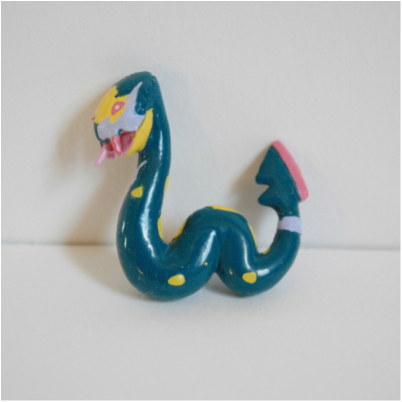 A very rare, delightful snakey Keshipoke.  I found this guy MIP on eBay, and since I haven't seen one pop up in years, I had to snag it!  I love when Seviper has merchandise of him where he's about to attack.  His body looks way more charismatic that way!  Although I don't have a problem with Seviper's default pose....he probably gets sick of looking like an accordion every day. 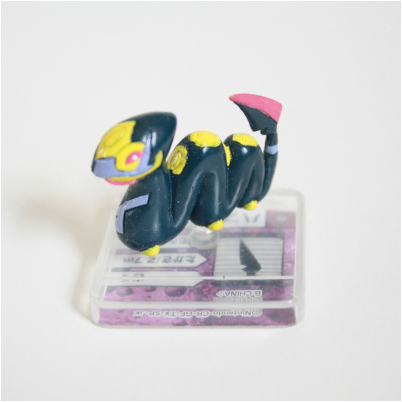 Pokedex figures are quite cool, since they feature tiny figures on a plastic base...and the base has a little cardboard insert with the Pokemon's stats, and their footprint!!!  In this case, since Seviper doesn't have feet...you can see the end of his tail there on the footprint portion. 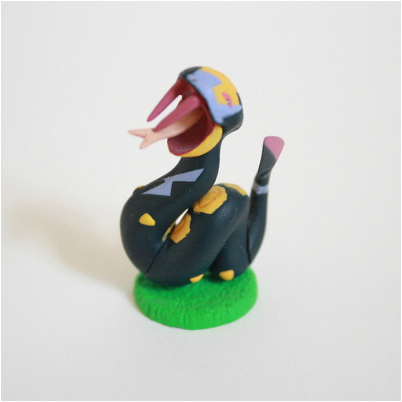 The Pokemon Trading Figures by Kaiyodo have a reputation of being extremely detailed and showcasing extraordinary poses of Pokemon. I'm very glad they did one of Seviper. The Trading Figures usually include a spinning base with the Pokemon's attack on it, but I purchased this one without it. I'll probably buy one with the base one day. 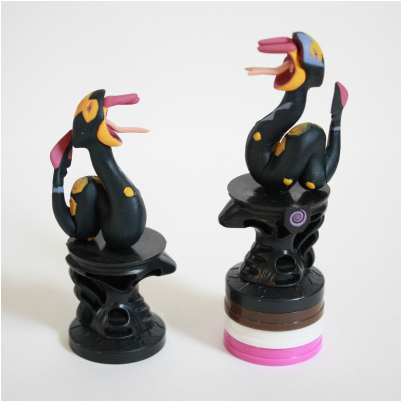 The same TFG figures seemed to be made into chess pieces!  I'm not sure what the little purple, white, and brown discs mean, except it's used to make the chess piece taller.

I wonder what kind of chess figure Seviper is supposed to represent anyway?  Now that I think about it, how cool would it be if this Pokemon chess game were like Harry Potter...where the chess pieces become alive and attack each other?  If that's the case, then Seviper is already ahead of the game, already posing like he's about to attack! 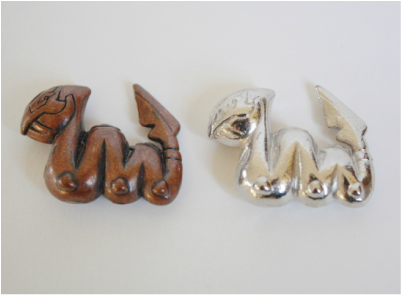 Although there are tons of lots on Y!J of 1st gen metal figures, and they seem easy to find....the opposite can be said for any generation beyond 1st gen.  This is especially true for the 3rd gen Pokemon.  They are super rare and super hard to find, which makes obtaining a full set one of the most difficult metal figure feats.  The metal figures beyond 1st gen only come in the natural colors (gold, silver, gunmetal, copper, bronze).

I remember being over the moon when I found the bronze one!  That feeling essentially doubled when I located a silver one.  Even if I'm unable to find the rest of the colors, I will die happy knowing that I was able to get my hands on at least two of these figures.  Now that's snakey love right there! 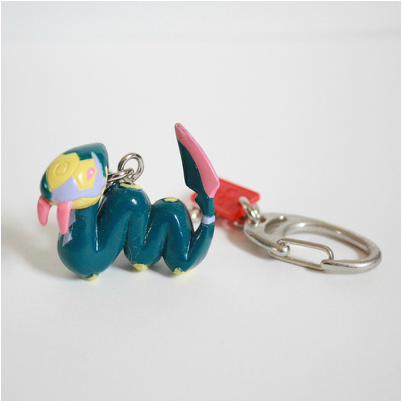 When I won this keychain, it came inside a plastic Pokeball.  Since this little guy was going on display, and at the time I was running out of space on my shelf for the snakeys, I just ditched the Pokeball, haha. It's hidden within the depths of my old collection boxes. Godspeed, you little plastic Pokeball! 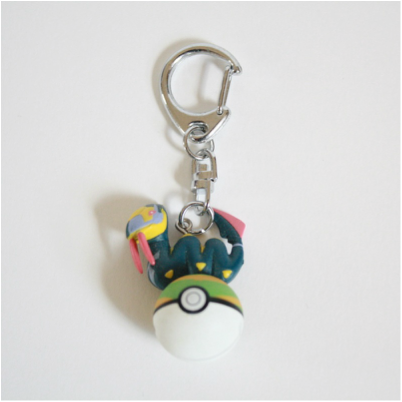 An adorable Seviper on top of a...it looks like a Safari ball, but I'm pretty sure it's not a Safari ball. (I don't know my Pokeballs AT ALL, oops!)

I fell in love with this piece of merchandise as soon as I received it. The Pokeball is actually a bell, and dangles oh so cutely.  I've seen other Pokemon displayed on different Pokeballs, so I wonder if this Seviper come on any other Pokeballs?  That'd be really cool if he did, I could always use more Seviper things! 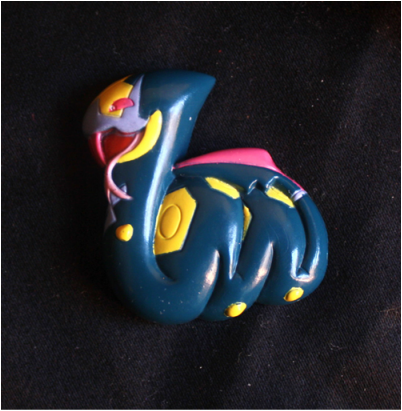 I love the organic flow of this pose. Plus he looks super happy and not mean (sorry Seviper, that wasn't meant to sound insulting!)

He chills with the big Ekans and Arbok magnets on my fridge. 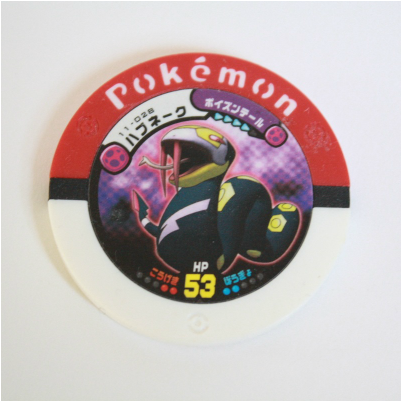 Another super happy looking snake!  This guy was able to get his very own Battrio coin.  Although the Battrio Coins are supposed to be "coins", they actually look and feel like poker chips.  If only we could gamble with Pokemon, and not real money!!! 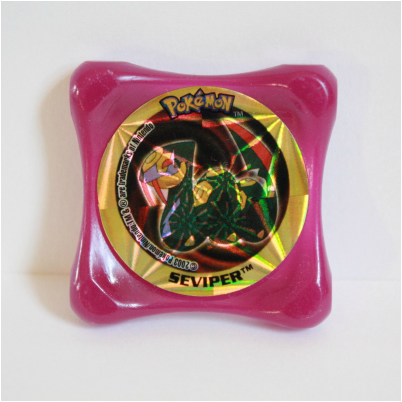 Yes it is!  Er, well...it's the name for a brand of merchandise! Although I'm not quite sure why....haha.  The Waps are a type of toy, made by the European company Panini.  What their purpose is...I have no idea.  There were TONS of Pokemon made into these little plastic thingys, and they come in lots of different colors.  The stickers that decorate the waps aren't always shiny and sparkly like this one is.

I'm going to guess it's gonna take me ages to locate each color.  Oh well!  That's what makes Pokemon collecting so exciting, the collecting never ends!!! 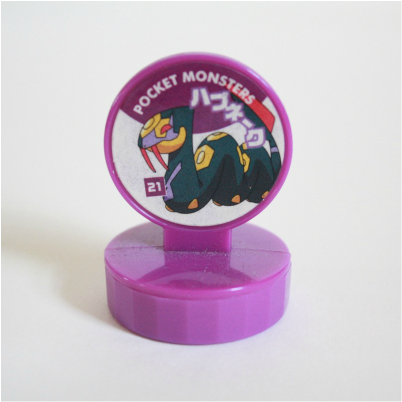 Finding a specific Retsuden stamp of a Pokemon is a daunting task in itself, but when it comes to the 3rd gen (AG) Pokemon Retusdens...oh man, be prepared to have tons of patience.  Some of the 3rd gen Retsudens have achieved grail status amongst many members, as they're difficult to locate and are very rare collector's items. They're definitely much harder to come by than the 4th gen Retsudens.  Why, oh why is 3rd gen merch so hard to find?!!!

All in all, this guy was definitely worth the wait and he added the perfect purple snakey touch to my packages and notes.  The ink inside has since dried out, which makes me very sad.  Maybe one day I can obtain another one, but I won't hold my breath, haha. 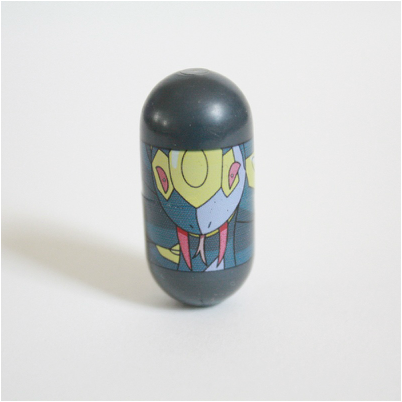 The Mighty Beans honestly are strange. They freak me out and make me laugh at the same time.  I remember when I was in high school, I saw these things on the store shelves and remember thinking, "what the heck kind of toy is this?"  Apparently you're supposed to collect different beans, and then put them on some sort of "track", tilt the track, and see which bean reaches the bottom first.  I'll definitely give the creators an A+ for originality!  But these toys are definitely not my cup of tea, haha.

This particular Mighty Bean is small, thin, and has a sticker of the Pokemon wrapped around it.  There's a tiny weight inside, and if you move the Mighty Bean along a flat surface, it will "walk".  Again, not my cup of tea, but he does look quite silly just sitting on my shelf! 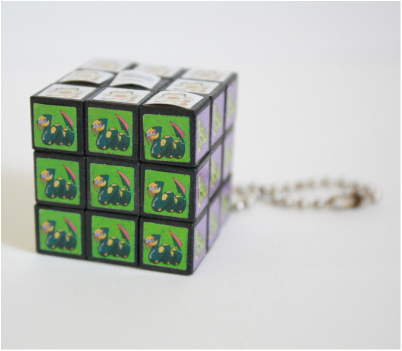 Not quite sure the origins of this neato keychain, but it's supposed to be a mini Rubik's cube!  The other sides feature other Team Rocket Pokemon, but the side that's most important to me is the one with Seviper on it.

The cube is decorated with tons of little stickers of Seviper on it!  I think this keychain is old, since some of the other stickers are starting to fall off.  Seviper is still standing strong though!  That's because he's a strong, awesome snakey who's always tough. 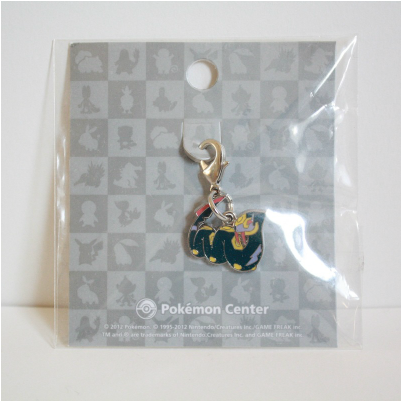 Yet another snazzy Pokemon Center charm, that was made during the 2012 charm hype!!!  I was so excited for my darling Seviper, as this is his first charm from the Pokemon Center!  His pose is still kind of generic, but his head is turned, which is a little different!  I can always appreciate subtle differences! 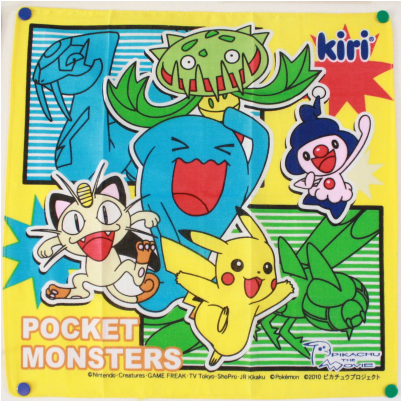 Not many flat cloth things feature Seviper, but this one here does!!!  And it features Team Rocket's other Pokemon, but oh man, that Seviper is literally the best.  I wish we could see more of him, but I'm just super happy that he's on a handkerchief to begin with.  He's also shaded in my favorite shade of blue!  A nice, vibrant cyan!!!