Weepinbell is another childhood favorite of mine. Something about him was incredibly intriguing to me, and I thought he was strangely cute. He was one of the first Pokemon cards I received in the 5th grade, and I couldn't help but think the art on the card was adorable. My interest in Weepinbell sparked my love of Grass Pokemon, my first favorite Pokemon type. I was absolutely obsessed with Grass-type Pokemon during my childhood; it was the became the only type of card I ended up collecting and I liked to fantasize myself and draw pictures as a Grass-type Gym Leader living in a forest themed Gym with all my Grass and Poison Pokemon (like Erika). Ever since then, a Weepinbell has always ended up on my team whenever I play a Pokemon game. 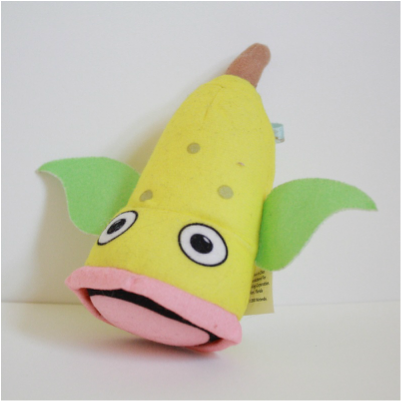 Oh Burger King, how you have hilariously derpified my favorite Pokemon. When I first joined PKMNcollectors and saw this in someone's collection, I absolutely had to find one. Since this is the only official Weepinbell plush, finding it was super crucial. I didn't find one until almost a year later, and I couldn't be happier.  He's very elongated, and really does remind me of a bell!  But no matter how silly he looks, he's super lovable and adorable.

A super rare, super charming, genuine Weepinbell Mirage Plush!  Confirmed to be a Mirage by other collectors, this guy is my pride and joy of the Weepinbell collection.  Not only is he a rare gem, but he's in pristine condition!  No rips, stains, or tears, he's definitely aged very well!

My very good PKMNcollectors friend, Catherine, notified me of this plush, telling me that a fellow collector had one for sale.  The original owner, a collector of Mirage plush (she goes by the name firevie), decided to re-home this lovely Weepinbell!!  After a month or so of going through the transaction, this guy came to me from Taiwan, to Australia, then finally all the way here to me in Virginia!  I'm forever thankful and indebted to both Catherine and firevie, as they gave me the opportunity of a lifetime to own something as magical as this Weepinbell.  It's not every day that you can feel that way as a collector, and it's definitely a moment I will treasure forever!

He's made of a very very soft and smooth fabric...maybe velveteen, but I'm not quite sure.  He reminds me of the types of plush I had growing up!  His eyes are made of hard plastic, and he has little spots embroidered on his head.  He also has a string and suction cup attached to the top of his head, which we all know is a common trait of Mirage plush.  I happened to spot another Weepinbell just like this one on Instagram recently, another collector was able to get a hold of one!  There usually just isn't ONE Mirage plush, they were produced in small numbers, so it's usually more than likely that other folks out there own one.  To see other people own such a rare thing though, that's so amazing!!! 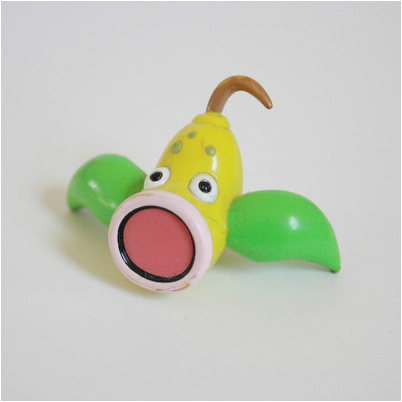 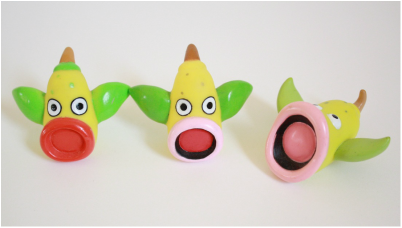 Different versions of Weepinbell's Kids!  The one on the left is his first Kids figure, his mouth is an obnoxiously bright red color. It makes him look like he just smothered his entire mouth in tomato soup or something.  The middle figure was his newest version, and it looks SO much better.  The colors are definitely true to Weepinbell!

The one on the right is his attack Kid, and he's doing the move Sweet Scent!  That pose is rather humorous...and it will always make me laugh.  I wonder if the Sweet Scent attack is followed by a loud "HURRR" sound?!!! 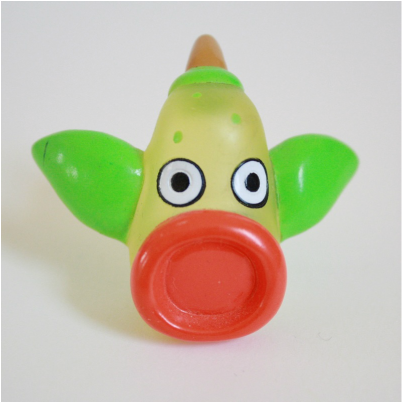 Neato weird looking clear Weepinbell! I wish they made the re-release Kid in clear form (maybe they did?! i'm not too sure), but I won't complain, since I love clear kids.

More FCS figures featuring a favorite Pokemon of mine. His eyes look rather awkward and funny to me, but I still think it's amazing.  The ones pictured in the middle, I'm not sure where exactly they came from, but I'm pretty positive they are also FCS figures.

The last one is an attack FCS figure (or Battle Museum ones, not too sure.)  He appears to be doing an Acid attack, but it looks more like clear puke. He'd probably fit in with my obnoxiously loud partying neighbors that I had when I went to college. 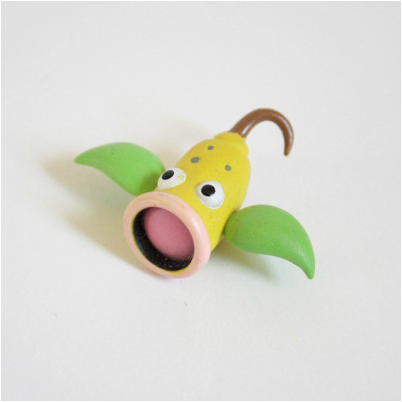 The Weepinbell line Zukan came from the same, super elusive and sought after RSE Special Set 1 Zukans, just like the Ekans/Arbok Zukan.  It's pretty hard to obtain, and it's generally very expensive to obtain the whole line.  I really just wanted the Weepinbell, since he's the most important part for me, but I really do want the full Zukan at some point in the future.  It's one of the more beautiful, super animated looking Zukan, and I know it would look quite awesome with my other Bells.

Even though I just have the Weepinbell, it still lives up to the Zukan reputation of being very detailed and spectacular all around.  Definitely one of my favorite Weepinbell figures! 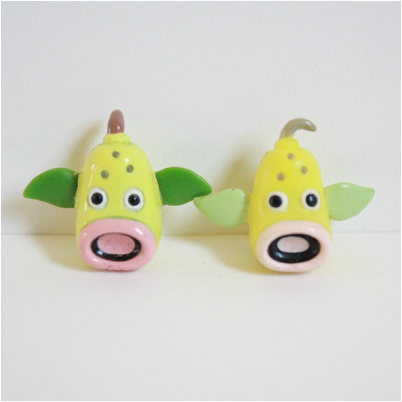 A really super tiny Weepinbell. He's probably a little bigger than the size of a thumbnail!  I believe these came from a play set, you know, one of those pocket size play sets like Polly Pocket (man, I remember those, they were the greatest!)  But I also do remember seeing them being sold in tiny clear packages, so maybe not!  Isn't it fun to ponder the origins of these old treasures? 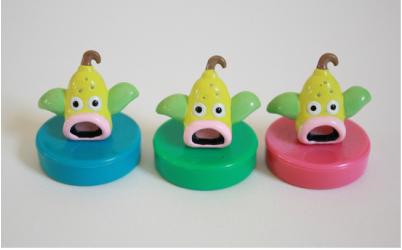 Ahhh, look at those cute frightened faces!!!!  They are still ultra adorable though. 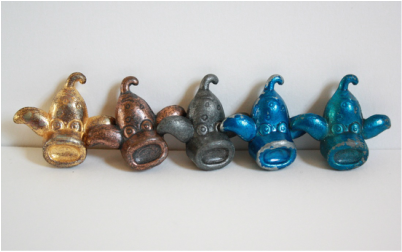 I love Metal Collection figures! So classic and shiny. Obtaining one is always a personal victory since they're so hard to come by.  Weepinbell is one of those more elusive characters!  I wonder where all of the other Bells are hiding! 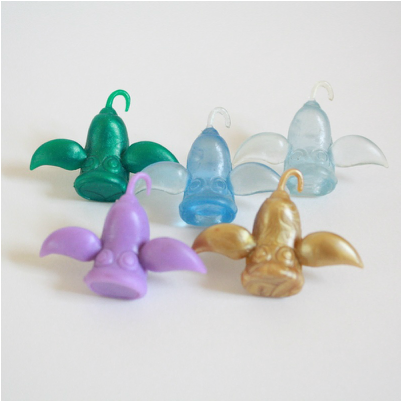 Rubbery awesome flycatcher Pokemon Mini Models. Weepinbell's eyes are still derpy and funny to me, just like his FCS figure.  His leaves are huge!  They almost look like wings.  Just don't fly away from me, Weepinbell!  I'll be a really sad Mar if you do! 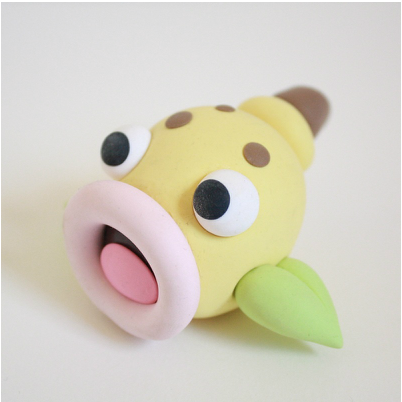 Oh my goodness!!!!  Words can't describe how lovely this sculpture is. It's my first custom sculpture that I purchased, and everything about it is just perfect and cute.

My extremely talented friend, Catherine, crafted this awesome Weepinbell. Check her out all of her other great work here!: http://egyptsand.deviantart.com/ 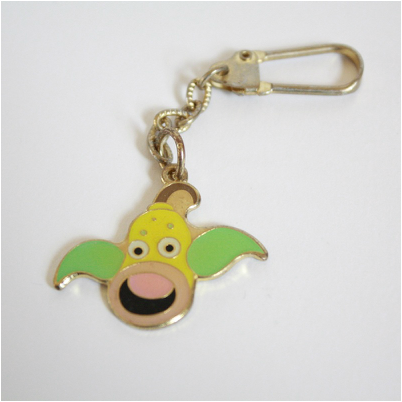 These keychains are quite novel. They're teeny and cute and also feature a back detailed view of Weepinbell. I would totally use this for my bags if I had more. 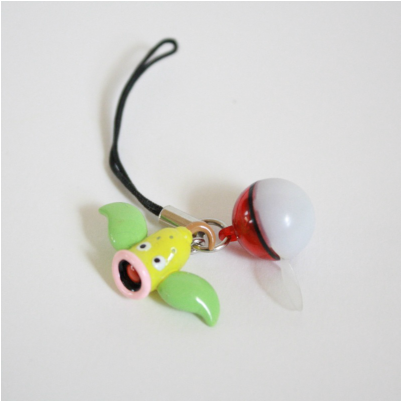 Another teeny tiny Weepinbell keychain/charm!  This would probably be best suited as a phone charm, due to the thin string-like strap.  The Weepinbell is surprisingly detailed, and the Pokeball accompanying it actually lights up!  There's a little plastic insert inside it to activate the light up portion, but I have left it intact. 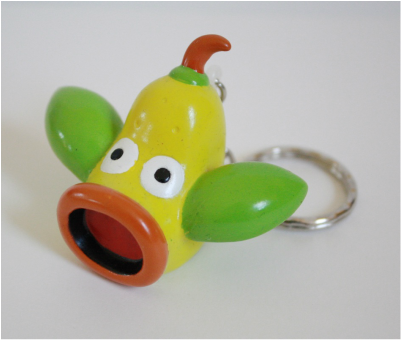 A super huge keychain of Weepinbell!!!  He's quite rubbery and a little shiny, and again, he's quite large!  Affixed with a normal metal keyring that we're familiar with, the figure part is a little bigger than a Kids figure.  When I first received it, it had a Banpresto hang tag, but I took it off because it took up so much space when I was displaying it. 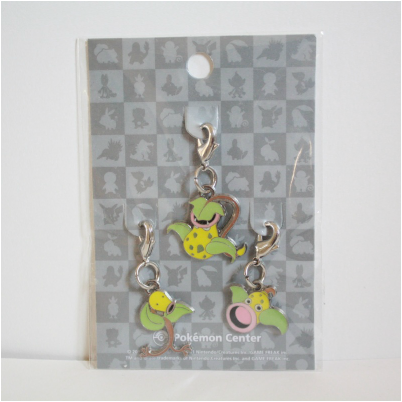 Weepinbell's very first Pokemon Center charms, just like Seviper and the Drifloon line!  The 2012 charm promotion was very good to all of us collectors.  Weepinbell's pose is more on the generic side, but his mouth looks much bigger!  He also looks so nice together with his Bell family.  Bellsprout looks like he's dancing!!!  Party on with your bad self, you silly Bells. 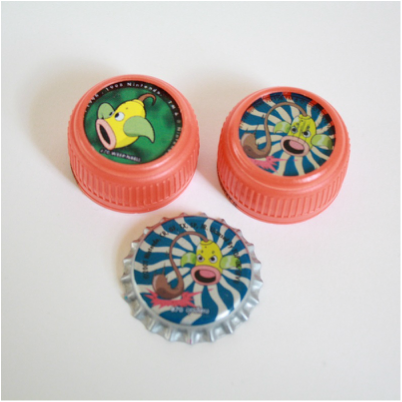 More super rare Mirinda bottle caps, both Mexican and Thai ones!  The wavy backgrounds on the attack art reminds me of the 70s for some reason. 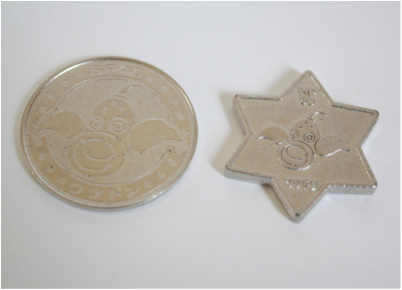 Super swagtastic silver Weepinbell coins.  I'm so curious to see what other colored coins and shapes exist out there for these 1st Gen Pokemon! 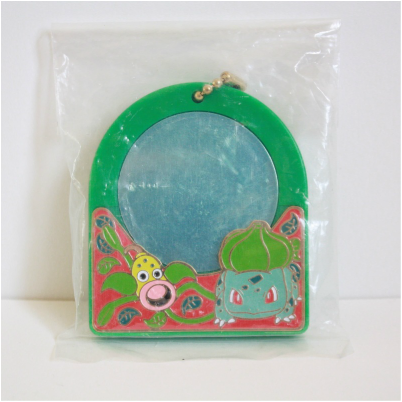 This mirror came from a very rare set of Pokemon themed mirrors!  Since they're small, they probably came from a Gachapon machine.  The mirror isn't reflective in the least bit; it reminds me of the "fake mirrors" they would give with your Barbie doll or in a doll playhouse.  Quite cheesy...but hey, it's just supposed to look cool, right?!

I very much enjoy this keychain, since I never knew it existed until 2014.  It's still in its little package too, and I don't plan on taking it out.  Since I'm naturally attracted to Grass Pokemon, and I have an appreciation for all 1st Gen Pokemon, I'm very happy that there is a cute Bulbasaur on this mirror too. 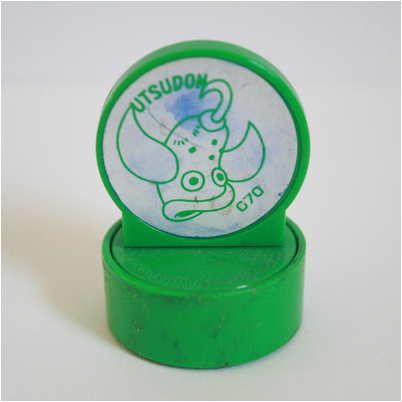 
This stamp is super loved, but still a great addition to my collection. It looks very similar to a Retsuden Stamp, but it's a lot bigger, so I'm not sure what exactly this stamp is called or where it came from.  The sticker features a very silly looking Weepinbell face.  That particular artwork always amused me. 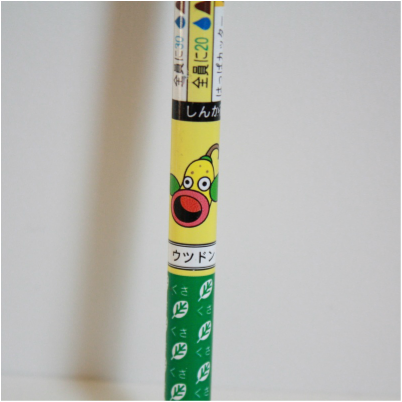 Just like my other 1st Gen Pokemon pencils, there was one that had a Weepinbell on it!  Unlike my other pencils, where the artwork of the Pokemon was towards the top (where the eraser would be), this Weepinbell is situated towards the bottom, where the pencil point would be if you sharpened it.  The Pokemon featured on top is actually a Bellsprout!  But of course, we only needed a photo of the Weepinbell because I'm picky like that. 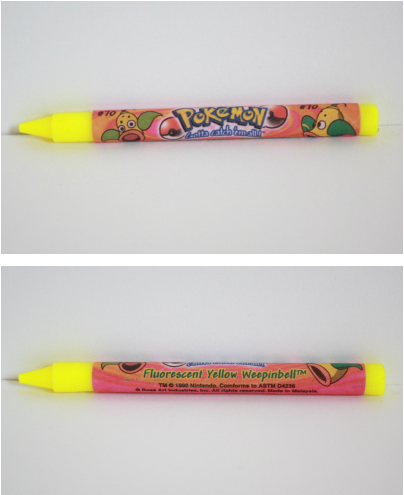 While I knew that an Arbok crayon existed (even though RoseArt effed up and called it Ekans, haha), I honestly did not know that a Weepinbell existed!!! It was a very nice surprise when I opened up that sealed box of crayons.

About half of the crayons that I received in that box were in varying condition; some were pristine (like this Weepinbell), and others were in very poor condition, and looked partially melted.  Probably due to varying storage conditions.  You can see more about the different crayon colors and conditions in my PKMNcollectors post here.

The color of Weepinbell here is "Fluorescent Yellow Weepinbell".  Fluorescent colors are my LEAST favorite colors, they're very loud and they hurt my eyes.  I'll make an exception for this Weepinbell though! 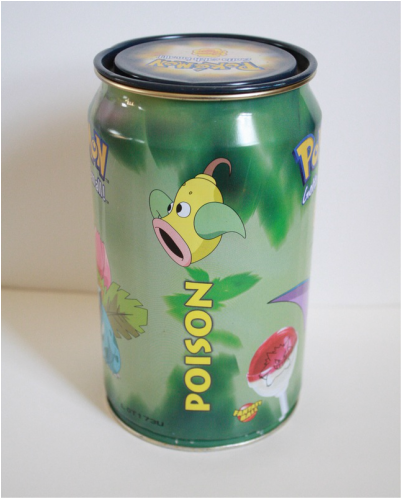 A retro tin featuring a bunch of different Poison Pokemon!  This was a Chupa Chups brand tin, and judging by the brand and the lollipops plastered on the tin, I'm going to guess that this tin was full of tasty Pokemon lollipops!

There's not very many unique non-flat things that feature Weepinbell, so of course I had to make every effort to snag this guy right away. 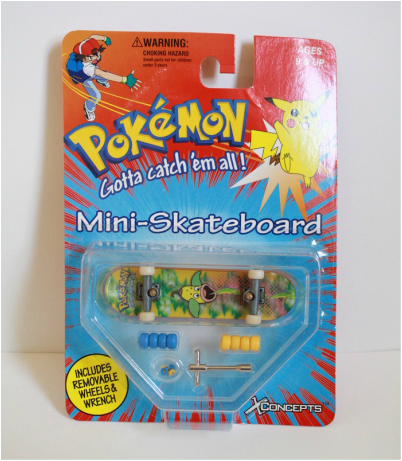 Another mind-blowing, gnarly mini skateboard, this time, featuring a Weepinbell!!!  The design is vibrant and grungy at the same time, as it should be, since those are the types of designs that are appealing on real skateboard decks!

You know, I bet Weepinbell would pass nicely as a World Industries character.  He almost reminds me of Flameboy!  But much friendlier...and not as macabre, haha.  That was one of my favorite skateboard brands when I was younger, mainly just due to the art style.

Still on the lookout for those elusive snowboards.  Since a skateboard exists, that means a snowboard is out there! 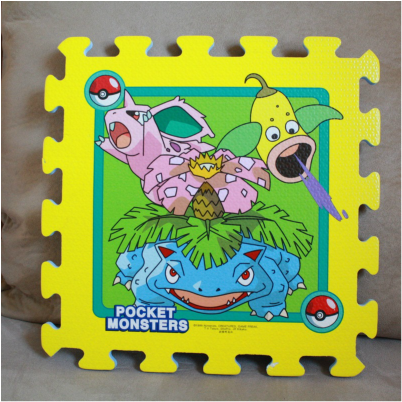 A magnificent, giant piece of foam, featuring a couple fabulous Poison Pokemon!!!  This thing is gigantic.  And if I were to guess, I bet this was supposed to connect with other similar pieces, and create a play mat of some sort!  Kind of similar to these ones, but with Pokemon on them!  Man, I would love a set up like that.